Today is National Running Day. It is also four days shy of my 10-year anniversary with running. On June 10, 2002, I was living in Kansas City, MO and teaching in an awesome school district. I came home at the end of each day around 4:30 and found myself making early dinner and doing very little in my evenings. It was a simple life. I saw friends from college and was in the praise band at church. I prepped my lessons, went to new teacher meetings, and volunteered at the Lyric Opera, but I was not particularly active. At age 23, this didn’t have too much of an impact on my waistline and I was certainly happy.

But on that particularly lovely Kansas City day I realized, “what am I doing here at 5 in the afternoon, eating dinner in my pajamas?” It had to change. So I put on some athletic-ish type clothes, some old sneaks and went to the park. I thought, “this is short, I can run around it once.” Ha! I made it about a minute before I felt like I would die. So walking, mixed with a bit of jogging and a new lifestyle had begun. I ran my first 5k that summer (running the whole thing, I mean) and stepped into Feet First for the first time where a fella named Jack sold me my first pair of Mizuno Wave Riders. I shuffled around my parents neighborhood that summer and tried running on the B&A Trail. Then the goal struck me, “hey, I can do a marathon…??!!” So I looked for marathons and found one called “Flying Pig”. Anyone who knows me that I have a big of an affinity for our porcine friends, so that was it! I had no idea about the course, or how to train, I just liked the name.

Fast forward through the next 9 months. I was on an opera fellowship so I lived in three cities, LA (loved running in Echo Park, ran my first 10K), Austin (ran the Austin 8K and fell in LOVE with the city and Town Lake), and finally as fate would have it, Cincinnati, home to the Flying Pig Marathon just 8 weeks into my stint at that company. I learned so much about myself that year. The first year of running HURTS. I had shin splints, IT band syndrome, and a stress fracture. I learned about good shoes, how to hold water, and that sticky stuff called Gu. On May 3rd, I toed the line with the 4:45 pacer named Star and didn’t leave her side for the next 4:42 minutes. I ate 7 GU’s (gross), had 6 ibuprofen, and had the best pigtail braids ever done up by my #1 fan, Mom. I had trained terribly, my longest run was 14 miles. Every single inch of me hurt afterwards, but as I crossed that finish line with tears in my eyes, I felt re-born. I felt like I had built a new lifestyle. I had run a marathon.

Well fast forward 10 years, 10 more marathons, coaching adults and kids, working at that awesome running store, mix in a slew of other races, a few triathlons, and one BIG triathlon and I am so grateful to running. I have not always given it my all and sometimes I have given too much but it has made me a new person and been a sustaining force through the cross-country course of life. It has been the source of my greatest joys, strongest friendships, and biggest laughs. Even now, as I sit this national running day out with a nasty shin splint, I offer my gratitude to the running gods for such an amazing gift. I found God through running. I found Love through running. I found Me. 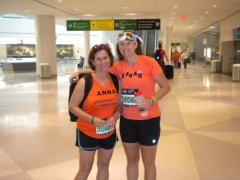 One thought on “Happy Anniversary.”

Ooh, I needed this one today. May I be more light, more encouragement, more clear with each passing day. #proverbs28 #learnwithoutceasing
Back at it which means back to my Monday night “stay up past 7pm” coffee. Very excited to sing this for the first time AND take it to Carnegie Hall. #asoc #beethoven #allthehighnotes
Did some cleaning...found my first recorder circa 1986. #onceamusicteacher #thirdgrade #hocomd
Atticus wanted to play the #dollypartonchallenge #wildandpreciouspack #attipup
Recreating American Gothic as canines?! #wildandpreciouspack
Feeling fancy. Might eat later. (Or right now.) #delish #ketocookery
%d bloggers like this: