Running can be a solitary sport. It can be a selfish sport. We take mass amounts of time out of our days and away from our families to train. We often race for the sake of racing. We race because we like to-it makes us happy, feel strong, feel accomplished, feel proud. Sometimes we race for charity-I’ve done that a few times. But more often than not, as you hit the starting line of a marathon the vast majority of your participants are in it for themselves. Two weeks ago-I was one of them. I wanted to start, run, and cross the finish line for myself. Not so I could boast-but certainly not in service or honor of others. As I started the marathon two weeks ago-there were charity groups EVERYWHERE. As this was the Marine Corps Marathon-a lot of the groups are dedicated to wounded warriors, veterans groups, and the like. As we started the day-we walked through a gaggle of wheelchair athletes-many without legs or arms or sight. This in and of itself was incredibly humbling…but as we started to run-and I kept seeing blue shirts with THIS logo. They were vibrant and they were constantly around me.

I wasn’t sure what they meant-I figured like many of the other groups-they were a veteran’s memorial group. I remember thinking-that’s nice, I like that logo. I like that font. (such a dork) Then I put it out of my head and continued to run.

I knew that mile 12-14 were going to be terrible. Hains Point, near the Lincoln Memorial, is typically the most boring part of the race. It is flat, breezy, and QUIET. Too quiet.

Then I saw this…. 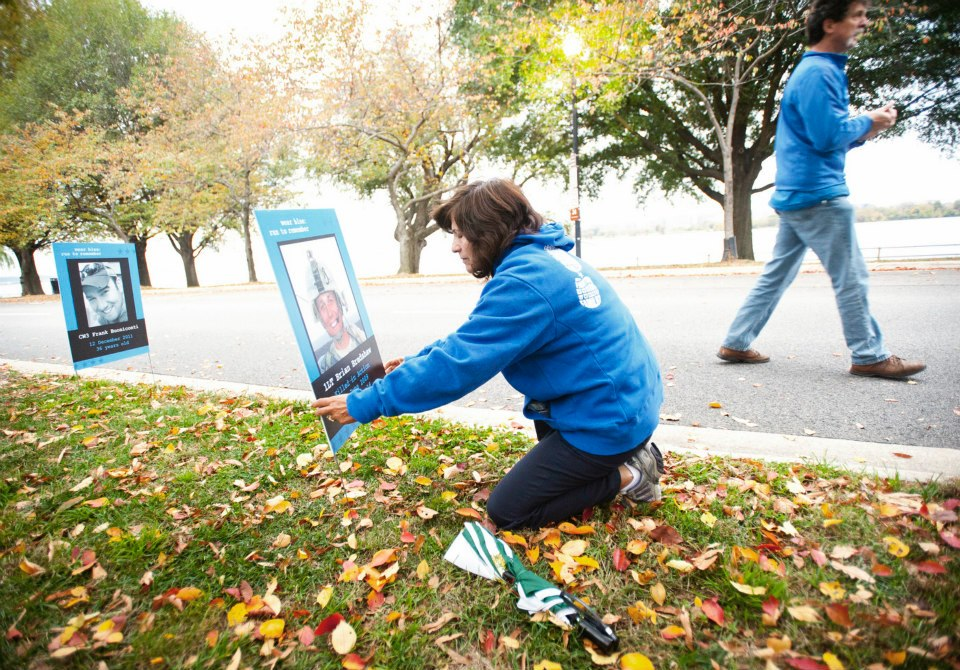 A picture. A name. A birth and death date. Lots and lots of them. Faces of YOUNG people. Young people who lost their lives in service to the country. The quiet changed from dreaded to holy. humbling. reverent.

The names kept coming and coming-Ryan, Michael, Juan, Michelle, Jonathan. I started to say them names, with each step or two a new name. Pushing my brain away completely from running and into trying to hold myself together from the emotion of seeing picture after picture. 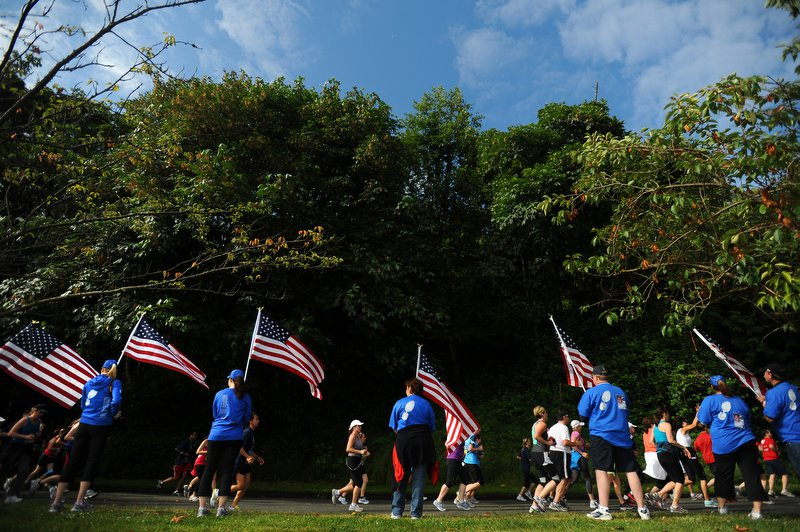 Then the pictures ended and the flags began. The families of the fallen soldiers  for half a mile holding large American flags in honor of their loved ones. In loving honor of their lives. In pride for their service. HUMBLED. Small. I felt very small, but not in a self-deprecating way but in a “wow, this world is so big and I am so grateful that these people have done this for me.”

But this is particularly hard for me because I don’t consider myself patriotic. I love my country. I love my freedom. But I don’t consider myself a cheerleader for America. I tend to wish for peaceful solutions to global problems and I don’t really support the idea of using force as a solution. However, I always believe in supporting the people who do make this choice, in service to this country-selflessly. And in this moment-of seeing those who had passed on serving under the guise of the flag-I was most simply grateful.

Wear Blue:Run to Remember has a simple mission. Honor the service and sacrifice of American military members. They are a young foundation but they are absolutely meeting their goal of serving as a Living Memorial. I’ve been walking past the memorials in DC for 35 years and this was the first time I have felt a sense of humility, gratefulness, and emotional connection to a memorial. Perhaps it is because these faces are my age or younger. Perhaps it is because these wars are present-in my lifetime. It doesn’t matter to me, either way-I’m thankful.

It is ok to be proud of oneself. It is ok to accomplish things for yourself. We don’t have to put ourselves down to lift others up. But perhaps, now and again, we can lift them up before ourselves.

“Piglet noticed that even though he had a Very Small Heart, it could hold a rather large amount of Gratitude.”

On that day, for that mile, and now days later, I feel a great sense of gratitude. I think a bit like Piglet-even as a small person in a big world-I can have a LOT of that.

**Source for All Photos: Wear Blue: Run to Remember**